In the area for a day, a weekend, or a week? Let us show you around. 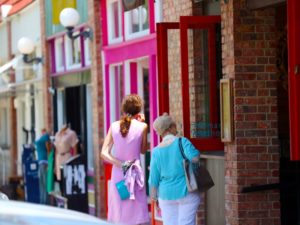 You will find first-rate retail that’s part of the local pulse all along the DART System — including urban neighborhoods and revitalized town squares. Spend a weekend exploring, pack them into a single day, or just pick one or two and while away an afternoon.

Start off your DARTable excursion by catching the Dallas Streetcar from Union Station in downtown Dallas to the Bishop Arts District. Fortify yourself for a day of shopping with breakfast at Oddfellows, a neighborhood mainstay with a welcoming vibe and great espresso drinks. Check out the local talent at Artisan’s Collective, and dig through the vintage finds at Maria’s Closet or the “cowboy casual” threads at Indigo 1745. For unique gifts, funny greeting cards and such, you’ve got several options – Bishop Street Market, All Good Things, and We Are 1976, for starters. There’s lots more to discover; Bishop Arts is a neighborhood that’s made to explore.

Take the Dallas Streetcar back downtown, and catch the Red Line northbound from Union Station. Stop off at Mockingbird Station, also a major shopping destination, and find standards like The Gap, indie boutiques like Accents and even a Loft Outlet store.

Or continue on to Park Lane Station, which gives you a couple of options. Just up the street, The Shops at Park Lane is a live-work-play destination with a lineup of shops that includes Nordstrom Rack, Bloomingdales The Outlet and Saks Off Fifth. Or hop the NorthPark Center Shuttle (Route 702), which will whisk you straight to the iconic mall that’s unlike any other. Not only will you find everything from Neiman Marcus to North Face to an Apple Store; the mall itself has a classic, modern design and artwork curated by none other than Ray Nasher. It’s a great place to grab lunch, too, whether you’re in the mood for burgers, Latin cuisine or sushi.

You still have more shopping ahead at Downtown Plano Station, which abuts a neighborhood full of boutiques and small shops, as well as restaurants and bars. Browse boutique clothing at Lyla’s, check out the healthy bath and beauty product at Sweet Home & Body, or try on the jewelry at La Foofaraw and Magaly Designs. Afterwards, grab some Mexican food or chill out over a margarita at Urban Rio. Who says a vacation requires destinations miles away? Take a DARTable staycation and let DART be your tour guide to North Texas’ one-of-a-kind destinations. Exploring the world right in your own backyard can occupy an afternoon, a week or a whole summer.

Carrollton was built around the railroads in the 1870s. Many buildings built near the tracks still line the town square – only now they’re next to Downtown Carrollton Station.  The historic downtown is more vital than ever, with a mix of local restaurants, mom-and-pop shops, and even a rock-climbing facility housed in an old grain silo.

It’s not hard to find the attractions and nightlife in downtown Dallas. There’s the Arts District, for starters, with its showpiece buildings and first-rate institutions. But downtown is also a home base for forays into some of the city’s coolest neighborhoods. You’re never more than a couple of DART Rail stops from iconic Deep Ellum, a hotbed of music and art; the Cedars, an urban entertainment destination; and the shopping and dining of West Village, gateway to Uptown. Bishop Arts District, with its diverse restaurants and shops, is just a short streetcar ride away.

Farmers Branch is richer in history than you might have known. The city’s 27-acre historic park is an open-air museum with numerous 19th-century buildings – including a train depot, school and old church. While you’re there, check out the Antique Rose Garden, where the flowers are grown without commercial fertilizers or pesticides. If you want to follow your visit with evening entertainment, just cross the street, where you’ll find a more than 60-year-old fire station converted into a theater. It’s all right next to Farmers Branch Station.

Downtown Garland shows the city’s rustic, rural roots. It’s a charmer: Local specialty shops, eateries and a great brewpub ply their trade in a historic neighborhood with a small-town vibe. Shopping ranges from ceramics to vintage clothing, and there’s a great flea market during most of the year.  There’s even an old-fashioned feed store. There’s always entertainment lined up at the Granville Arts Center, and the Plaza Theatre is an Art Deco gem that sometimes screens free movies. Afterwards, a nightcap is a definite option.

Irving is a tale of two cities: Las Colinas is a bustling, growing enclave of shiny buildings, with restaurants, canals and the one-stop-shop that is the Toyota Music Factory – featuring a concert venue, Alamo Drafthouse cinema, and plenty of dining and sipping options. You’ll find the flip side of this modern mecca in the Downtown Heritage District, with its quaint architecture, low-key shopping and numerous restaurants, including an honest-to-goodness soda fountain. The Orange Line gets you to one; the Trinity Railway Express, to the other.

There’s a reason they call it the Downtown Plano Arts District. The neighborhood is bursting with cultural venues: the Courtyard Theater, Cox Playhouse, [email protected], ArtCentre of Plano and Interurban Railway Museum. McCall Plaza and Haggard Park host several live music series. The neighborhood itself artfully blends old and new. While you’re there, visit one of many restaurants and taverns, or check out the cool array of boutiques.

Get off the Blue Line in Downtown Rowlett, and a slower pace envelops you. The town’s main drag is relaxed, and The Village of Rowlett Downtown – a multiuse project in the center of town – brings a new vibrancy to the neighborhood. The city and the development regularly host events on Main Street, including Additionally, you’ll find cute boutiques, a coffeehouse, restaurants and a brewpub.

The music lover is in luck in North Texas. From tiny clubs with an underground vibe, to a magnificent concert hall with world-class programming, an “embarrassment of riches” beckons the tuneful staycationer. Some of the premier places to take in the local scene are totally DARTable.

The neighborhood surrounding Cedars Station has lots in store for the music lover. Spend an hour – more like an afternoon – perusing the inventory at Bill’s Records and Tapes, one of the region’s first independent record stores and still one of the best. Vinyl fan? You’ll find yourself in LP heaven as you dig through stacks and stacks of records, picking out gems, curios and long-lost favorites. Visit Bill by hopping the Red or Blue Line to Cedars Station, then taking a short walk.

Afterwards, revel in your new purchases at Opening Bell Coffee, a coffeehouse just down the street that also hosts acoustic acts, singer-songwriters and DJs. You can get also get beer and wine, plus sandwiches, pastries and other coffeehouse fare.

For some hot nightlife, head to a destination synonymous with music: Deep Ellum. The district’s location along the Central Track made it a hotbed of Texas blues back in the 1920s. Today, two DART stations serve the district: Deep Ellum and Baylor University Medical Center stations, both on the Green Line. Check out the neighborhood’s murals, many of which honor the legendary bluesmen who put Deep Ellum on the map. Then see tomorrow’s legends at fabled stalwarts such as Club Dada and Trees; head to an intimate spot like Three Links or the Twilite Lounge; or take in a big-ticket concert at the spacious Bomb Factory.

Not that Deep Ellum has a monopoly on music. Other places to keep in mind for your evening’s entertainment: Irving’s Toyota Music Factory, a one-stop-shop for entertainment, including the eclectic musical acts at the state-of-the-art Pavilion – a 10-minute walk from Irving Convention Center Station. Carrollton and Garland are both in on the act, too, with periodic concerts in their respective town square – the Green Line’s Downtown Carrollton Station and the Blue Line’s Downtown Garland Station. And there are often live tunes at Richardson’s CityLine – the “new urban” development’s spacious, welcoming plaza is lined with restaurants and lies only steps from CityLine/Bush Station on the Blue Line. 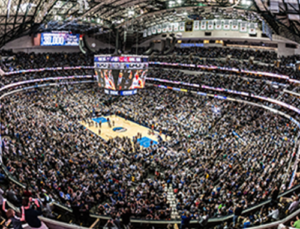 When you just have one day to explore the city, it’s important to get it right.

Start off by taking DART Rail to Akard Station and walking down to the Dallas Museum of Art and Nasher Sculpture Center. These two world-class museums are just across the street from each other, making for a wonderful double shot of Dallas culture.

Afterwards, stroll over to the adjacent Klyde Warren Park, a 17-acre oasis connecting the city’s Downtown and Uptown neighborhoods. Grab a quick bite from one of the many food trucks, find a spot on the grass and soak up some afternoon sun.

If you’re in an athletic mood, hop on one of the many bike-share options (including LimeBike, Ofo, VBike and Spin) and enjoy a leisurely ride into Uptown. The West Village on McKinney Avenue is home to fun boutique shops and some of the city’s favorite patios. For a true workout, the Katy Trail is a 3.5-mile hike-and-bike trail with numerous entry point throughout Uptown.

Finish up your day by taking the Green or Yellow line to Victory Station at American Airlines Center to catch the Dallas Mavericks or Dallas Stars in action. If the teams aren’t playing, head into Deep Ellum on the Green line for a nightcap at one of the many rooftop lounges overlooking Dallas’ neon skyline. 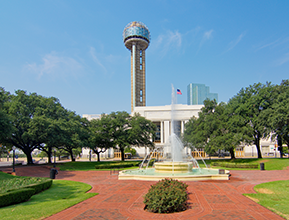 Spring weekends bring pleasant weather and tons of events across town. On Friday, get your bearings from atop one of the city’s iconic buildings.

The observation deck at Reunion Tower offers a panoramic view of Dallas from 50 stories up. Afterward, grab a seat at Five Sixty, the acclaimed restaurant and bar from Wolfgang Puck. To visit, take the Red or Blue lines to Union Station, then follow the signs to the underground walkway to the Tower.

Saturday, get your shopping in with a visit to Downtown Plano (Red and Orange Lines) and visit the many unique galleries and boutiques of the nearby Historic District. Then take the Red line down to the Dallas Zoo and experience its brand-new Simmons Hippo Outpost, an immersive habitat that features a huge underwater viewing window.

Springtime afternoons mean one thing – the Rangers are on the field and televisions across town are tuned into the game. Take DART into the Uptown neighborhood (a short walk from Cityplace/Uptown Station) and stroll down McKinney Avenue to find a venue that fits your level of enthusiasm. 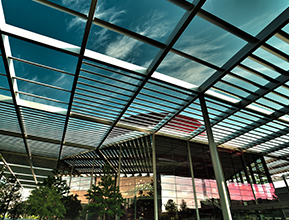 With so much to see in Dallas, it can take a week to fill everything in!

First, let’s talk food. Neighborhoods like Uptown, Deep Ellum and Bishop Arts District are epicenters of the city’s foodie movement Sping temperatures make for perfect al fresco dining, which favorites like The Rustic (Uptown), Stirr (Deep Ellum) and Bolsa (Bishop Arts) offer in spades. And if you’re searching for the quintessential Texas burger (and who isn’t?), Big Star Burgers (Downtown Rowlett) is the place to go.

The Dallas Zoo is home to all things furry and scaly, while the Dallas World Aquarium showcases the life aquatic as well as an amazing South American rainforest experience. Get there via the Dallas Zoo Station and West End Station, respectively.

In spring, two of the city’s favorite teams are in full-swing. The Dallas Stars and Dallas Mavericks both play their home games at American Airlines Center (Victory Station), which is also the place to see national touring acts.

To keep fit during your Dallas excursion, head out on the Katy Trail, a 3.5-mile paved running and cycling trail that begins at American Airlines Center and crosses the Knox-Henderson neighborhood. Refuel at Katy Trail Icehouse, a popular outdoor venue that directly overlooks the trail.

Of course, no trip to the Big D is complete without some retail therapy. Local favorites include NorthPark Center (a 10-minute walk from Park Lane Station) and the shops at Mockingbird Station.